The Yukon River is the longest river in both the Yukon Territory in Canada and Alaska, stretching 1,980 miles from it’s headwaters in the Yukon Territory and across the state of Alaska to where it empties into the Bering Sea.  It is believed by some anthropologists to have been the main immigration route for North America’s first human inhabitants.  It was also one of the principal means of transportation during the Klondike Gold Rush.  Today it is heavily used during the winter as a “highway” of sorts for travel between villages. 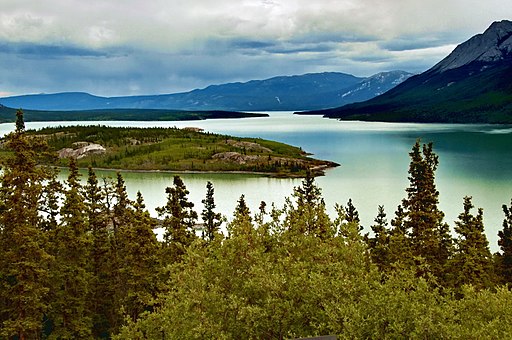 The Yukon River in Summer

Roughly 135 miles of the Northern route of the Iditarod trail runs down the Yukon, beginning at Ruby checkpoint.  After resting 8 hours in Ruby, Sean took off to start his journey down the river.  This leg of the race is generally very easy running that normally presents no real problems.  It is a major snowmachine “highway” that is heavily used by the locals all winter long.  The trail leads the teams around common river hazards such as overflow, rough ice, and open water, so if mushers stick to the trail, it’s generally a pretty smooth, gentle ride.  So gentle, in fact, that we’ve heard rumor of a musher or two falling asleep on the back of the sled in previous years!

The big obstacle this year is the fresh, heavy, wet snow that has fallen, which has led to some deep snow drifts that have really slowed teams down along the Yukon.  The good news is that further up the trail near Kaltag, Jessie Royer observed that the temperatures they’re experiencing in that area are actually causing the snow to be slicker, faster, and easier to pack down.  Hopefully that holds until Sean gets there!

Thomas Waerner is the first musher to hit the coast at Unalakleet!  Wade Marrs is following about 35 miles behind Thomas, and a whole slew of mushers are camping out at the Old Woman Cabin, which is rumored to be haunted, approximately 38 miles out of Unalakleet.  In this group are top mushers Ryan Redington, Brent Sass, Jessie Royer, Joar Leifseth Ulsom, Mitch Seavey, Paige Drobny, and Aaron Burmeister.  Once they get moving, they could easily run through Unalakleet, potentially passing Waerner as he rests, so it’s still anyone’s game.  As the day warms up and snow continues to fall, expect to see teams slowing down as they break trail.  Many mushers will also choose to rest their dogs more during the heat of the day and do most of their running at night.

Read more about the Ghosts of Alaska’s Iditarod Trail