That falling snow has had an impact on the trail.  Reports from mushers arriving into Nikolai earlier today said that the trail conditions were deteriorating, and that there was overflow on portions of the trail that was up to two feet deep in spots.  Some mushers were coming in with wet feet.  It’s generally been slow going for the teams. 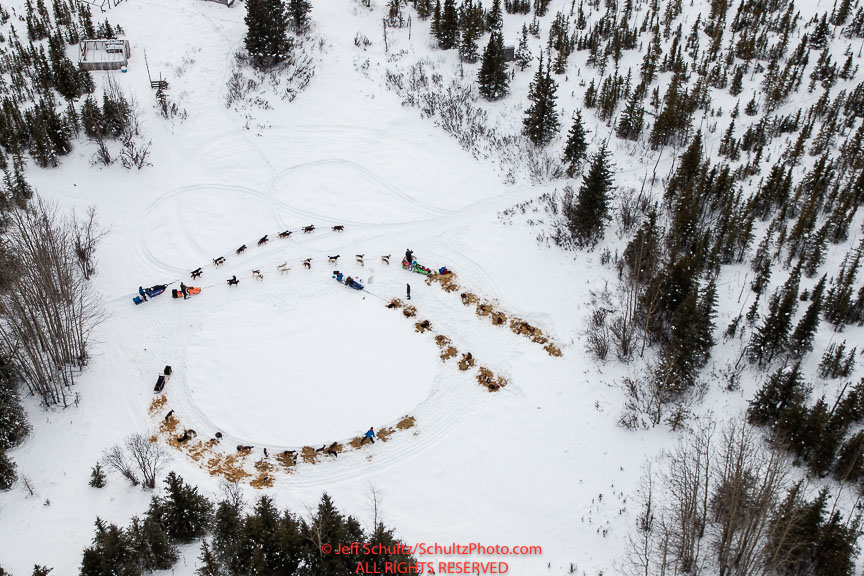 One team passes another as three teams rest at the buffalo camp area between Rohn and Nikolai during the 2018 Iditarod race on Tuesday afternoon March 06, 2018. Photo by Jeff Schultz/SchultzPhoto.com (C) 2018 ALL RIGHTS RESERVED

With these kind of trail conditions it is often safer to run long and slow than it is to run that same distance quickly.  Fast is okay on a fast trail, but fast is not good on a slow trail.  Our friend Bryan Bearss wrote a very good article on that for KTVA that is worth a read: “How soft snowpack leads to injuries on the trail“.

For the 48 mile run to McGrath, the trail will cover a lot of lakes and rivers, and many teams are on their way there now.  Mitch Seavey just went through McGrath and is heading to Takotna, and Iditarod Insider told us that he is planning to take his 24 hour break there.  Takotna is a popular stop for 24’s, and we’ll start to see some teams taking those breaks as they arrive into the next several checkpoints. Life is so rough! Zig seems to be enjoying her time taking it easy.

*We talked with Alex prior to this post (we often do, he’s a wealth of information and a great help with these!), and he predicted Jeff would depart Nikolai at approximately 20:00, and checking the tracker… Jeff was out at 20:20, with 15 dogs.  🙂